6 Things That Happen When You Pursue Food Freedom 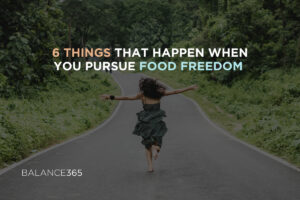 Nobody can deny that Western culture is steeped in dieting. The idea that people – especially women – should strive to be smaller and take up less space to increase their worthiness is the cornerstone of diet culture. It’s also how millions of women determine their value as a human being.

Hands up if that’s ever been you.

As hesitant as you might be to admit to your dieting past, there’s no shame in it. Diets are everywhere, so getting away from them can feel almost impossible.

If you’ve ever considered leaving diet culture (which is hopefully why you’re here!), you may have come across the term “food freedom.” To some, food freedom is the opposite of dieting, invoking visions of eating whatever you want, whenever you want and not having a second thought about it.

We would argue, though, that that isn’t food freedom at all; it’s just the flip-side of the coin. It’s rebellion, and living in a state of rebellion with food isn’t freedom.

So, what IS food freedom? To help you understand the term – and know what to expect when you let go of dieting – here are six different ideas that encompass what Balance365 believes food freedom actually means.

First and foremost, food freedom involves giving yourself permission to eat all foods. This can be very difficult for anyone who has been stuck in a cycle of dieting for any length of time. By their very nature, diets are an attempt at control. The problem is, diets involve food restriction to (presumably) achieve that control, whether it be in the form of restricting the amount, type of food, when to eat, etc. When you’re dieting, you’re unable to listen to your own body – your energy level, feelings of hunger or satiety, food preference, etc. – because you’re listening to an outside source to determine your food intake. It completely messes with your ability to trust yourself (we’ll get to that in a minute) and eat according to how you feel or what you actually want to eat (otherwise known as intuitive eating, a phrase – inside a very important book! – coined by Evelyn Tribole, MS, RDN and Elyse Resch, MS, RDN, both pioneers in the study and effect of dieting behaviours).

Allowing yourself to eat without these restrictions can feel very scary. Why? Because you’re giving up the “control” dieting provides and you’re afraid of gaining weight which, according to Western culture, would be bad.

The control dieting gives you is an illusion. We know that dieting and restriction create food preoccupation and increase the risk of binge eating – typically, on the foods you’re “not allowed” to have. By giving yourself permission to eat those foods, and whatever else you want, you are actually gaining back the control you’ve been searching for – and have taken the first (very significant) step toward achieving food freedom.

Dieting teaches us to stop listening to our own bodies. If you’ve ever set a timer so you know when you are “allowed” to eat again, you know exactly what this means. Stepping into food freedom helps you begin to trust your body again, and to understand that it knows when it’s hungry and when it’s satisfied.

Building this trust back up isn’t easy, especially in a world where we’re told other people, products or programs know what’s better for our bodies than we do. In fact, tapping into your hunger and fullness cues after years of ignoring them can seem like trying to complete a puzzle with half the pieces missing. Except, they’re not missing: they’ve just been swept under the couch and you’ve got to shine a flashlight under there to pull them out and fit them in.

It takes slowing down, tuning into how your body feels before, during and after eating and being very intentional about responding appropriately to those cues. The end result of trusting your own body and its cues around food is totally worth the effort. For the obsessive calorie and macro trackers out there, studies show our internal cues can be more accurate at gauging how much food we need than our apps. We covered this exact topic in our podcast, so check it out if you’d like to know more: To Calorie Count or Not to Calorie Count?

Real talk: everything about letting go of dieting is uncomfortable at first. For many women, it feels like they will never regain control of their eating or like they’ll never stop gaining weight. The truth is, the greatest learning opportunities lie within the most uncomfortable situations.

When you begin the walk toward food freedom, you are essentially giving up a belief system, one that may have steered your entire life so far. Cue the discomfort! However, it’s been said that when you’re learning something new (i.e. how to live without dieting), you will put forth the most effort at the very beginning of the lesson. This feels uncomfortable and even unsatisfying, like you’ll never get to where you want to be. But you must understand that challenging your long-held beliefs will feel uncomfortable, and it’s totally okay.

As time goes on and you continue learning, your efforts (and discomfort) will naturally decrease as things get easier. In other words, the discomfort you feel when you stop dieting is temporary. But the freedom you gain is for a lifetime.

This is a two-in-one aspect of food freedom but you can’t speak of one without the other when it comes to putting down dieting. Diets are set up to fail you by teaching you not only to stop listening to yourself but to also stop caring about yourself. In the quest to be smaller and weigh less, you learn that failing to achieve that quest is your fault. Every time you fail, you beat yourself up; no matter what you do, it’s never good enough.

When you come to food freedom, you are finally able to show yourself compassion. You begin to care about how the food you eat makes you feel, what effect it has on your body and even how it tastes and whether you like it or not. Working toward food freedom also gives you the chance to forgive yourself; to make peace with your past and the decisions you made, and to commit to repairing your relationship with food and with yourself.

Working toward food freedom means you’re going to really get to know yourself. After years of being told by diet culture that the essence of you isn’t good enough, becoming intimately familiar with who you really are – and learning to, at the very least, respect that person – is essentially the biggest middle finger you could ever give diet culture as you make your way out of it for good.

No matter whether you’re talking emotionally or physically, dieting messes people up, badly. Simply put, food freedom provides you with the opportunity to heal that mess. By working to heal your relationship with food, the effects of that healing will trickle down into other aspects of your life – most importantly, the relationship you have with yourself. You can come to a place of self respect, compassion and forgiveness – maybe even self love – by choosing to embrace a life without dieting. Healing will help you realize that you’re worth the effort.

Food freedom involves a great many things. But at the heart of it, you’re learning to make peace with food and your body. It doesn’t mean you can’t have goals to change your nutrition habits or lose weight again; it means you can approach those decisions from a place of self-care rather than fear and panic.

At Balance365, we help women find their ideal body weight without dieting or destroying their relationship with food. If you would like to learn more click here.

This website uses cookies to improve your experience while you navigate through the website. Out of these, the cookies that are categorized as necessary are stored on your browser as they are essential for the working of basic functionalities of the website. We also use third-party cookies that help us analyze and understand how you use this website. These cookies will be stored in your browser only with your consent. You also have the option to opt-out of these cookies. But opting out of some of these cookies may affect your browsing experience.
Necessary Always Enabled
Necessary cookies are absolutely essential for the website to function properly. These cookies ensure basic functionalities and security features of the website, anonymously.
Functional
Functional cookies help to perform certain functionalities like sharing the content of the website on social media platforms, collect feedbacks, and other third-party features.
Performance
Performance cookies are used to understand and analyze the key performance indexes of the website which helps in delivering a better user experience for the visitors.
Analytics
Analytical cookies are used to understand how visitors interact with the website. These cookies help provide information on metrics the number of visitors, bounce rate, traffic source, etc.
Advertisement
Advertisement cookies are used to provide visitors with relevant ads and marketing campaigns. These cookies track visitors across websites and collect information to provide customized ads.
Others
Other uncategorized cookies are those that are being analyzed and have not been classified into a category as yet.
SAVE & ACCEPT